Family and pets: I live with my parents, sister, and 4 dogs here in our main home in Zamboanga City

How did you get started with Graphic Design?
Since I was in my early days at school I always ace any creativity task and I told myself I’m pretty good at this which became my strength though it wasn’t that clear to me that there’s so much bigger path it will take me. My dream as I grew older varies. I know I’m not the only one who experiences that. You know typical Asian career path dreams but when I went to college it shifted my ideologies in some aspect in my life. I have a bachelor’s degree in computer science. A lot would always say why I didn’t just take up any graphic design or art-related course or why put myself in a difficult situation. All I could say I like technology and being creative is my natural skill. Out of surprise, both things work wonderfully in my life specifically in my career. The two things I love the most are beautifully combined in the path I chose. My foundation was really in high school. I was part of a top section so we have electives in graphic design. We were introduced to Corel and Adobe. That’s the time I fell in love with those tools. In my head, you could do magic with these tools lol. Then, when I got into college I was wondering about everything then I crossed with this organization. I find it interesting and I could see myself there. I told myself they were the people I wanted to be around because that organization catered to talented students in our university. To my surprise, it’s not an easy peasy club or organization. I was interviewed and screened. Fortunately, I passed. Long story short from Junior Graphic/Layout Designer I went to Senior Graphic/Layout Designer. In my senior year, I was honored to lead the organization. During those times I learned a lot of stuff. Grateful to that organization—I grew skills-wise. Also, I gave credit to everything I experienced during college days because it gave me the passageway to my career now. Since I graduated I already have the idea about remote or home-based jobs. It was difficult especially, in the field I’m in. A lot of competitors and whatnot but that was just the beginning. When I got my first client that was the happiest thing for me at that time. I risk a lot of opportunities to be honest because I truly believe you could create your own opportunity— even just staying at home. I started from scratch  and now I’m grateful because when I look back it was different—from the tools and resources. Currently, I’m focusing on Graphic and Web Designing. I could say it’s my dream job after all.

What do you love about working for Thrive so far?
Thrive has been always supportive of every employee and I could attest that. They treat everyone as a family even if we are from different races and cultures. Also, the positive environment at Thrive makes me delightful to work and do better.

When you’re not at work, how do you spend your time?
I usually rest or relax and spend time with my family. I also love to cook during my free time.

If you could turn anything into an Olympic sport, what would you have a good chance of winning a gold medal for?
Being a night owl person lol

What would be your karaoke go-to song and what setting would we likely find you singing it in?
Someday by Sugar Ray in a Karaoke Pub or at home  (I’m not really good at singing to be honest so I think I could nailed this one which is one of my favorite songs lol).

If you could be any character from any book or movie, who would you be?
Five from Umbrella Academy. I admired the character so much lol

Where did you grow up and what is special about that place?
I grew up in Zamboanga City, Asia’s Latin City in the Philippines. We spoke a spanish-creole language which already makes us special in Asia but one thing that makes it special more about this place is the diverse culture.

If you could invite three people to dinner (dead or alive), who would be at the table and why?
My late older brother, Ada Lovelace, and Leonardo da Vinci. I just want to sit with them and talk a lot of stuff. 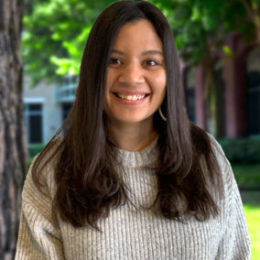 Lesley is a writer and a content editor for Thrive. With a background in print publishing, she has since spent several years developing digital content for a number of industries, including eCommerce, travel, and digital marketing. When she's not spinning a sentence or perfecting punctuation, she's spending time outside or searching for new restaurants to try.